Tuesday 26th August Glazing manifestation artworks for the ‘Heart of the Campus’ building, for Sheffield Hallam University, Collegiate Campus. DIGITALLY PRINTED WHITE INKS OVERLAIN IN OPAQUE & TRANSPARENT LAYERS ONTO OPTICALLY CLEAR VINYL . Phase 1 of the installation by VGL has now completed, but I have yet to get images of the completed works on site. The following images are of the approved production artwork for Phase 1. We are now awaiting confirmation that the Phase 2 project will be put into production. 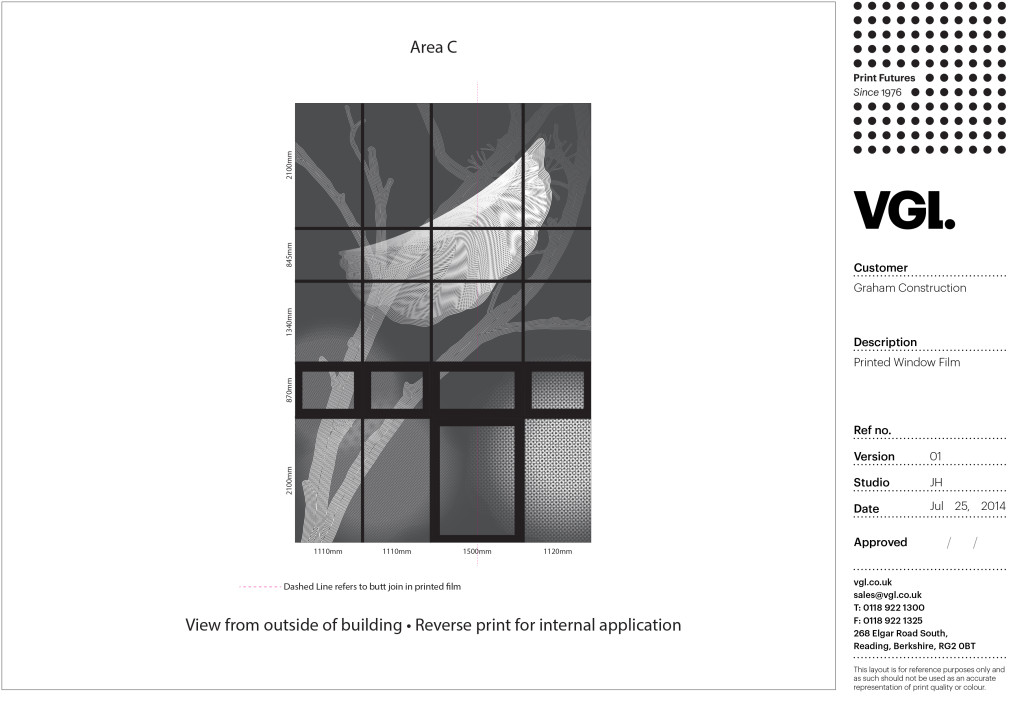 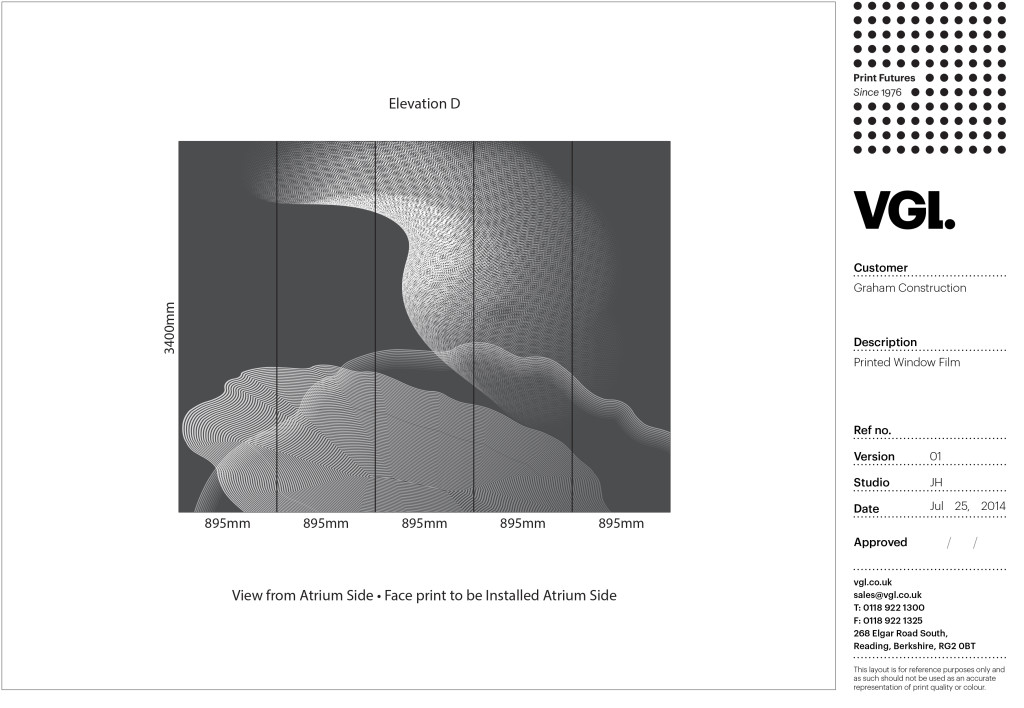 GLAZING MANIFESTATION ARTWORKS TO THE ‘HEART OF THE CAMPUS’ BUILDING FOR SHEFFIELD HALLAM UNIVERSITY, COLLEGIATE CAMPUS .

Up to Sheffield to walk around site with Carly Birkett of VGL . I am developing the glazing manifestation artwork in collaboration with VGL and we have limited time to get this project developed and installed. As usual the project contractors, Graham Construction were really helpful on site and assisted in the process of taking all ‘as built’ measures of the glazing screens which will take the artwork.

I made a site visit to the Heart of the Campus building along with Andrew Illingworth, Interior Designer for HLM Architects & Garry Farmer, Project Manager for Graham Construction, the main contractors on the project. Seen from Collegiate Crescent, the building is just visible behind the mature Beech trees.

I have been commissioned to extend the original brief for a cnc routed Rockpanel rainscreen on the West Elevation to include digitally printed vinyl manifestations for the East Elevation glazed curtain wall and interiors. This was an incredibly useful visit as the building has really moved forward since my last time here in January this year.

The interior atrium is three storeys high and filled with light. It is a dynamic architectural space which has as a centrepiece, a cantilevered cube projecting out from the first floor. When sunlight floods in via the fully glazed atrium roof, the whole building is suffused with light and shadows.

Whilst on site I couldn’t resist a quick look at the West Elevation Rockpanel ‘drawing’. This artwork is cnc routed into the rain screen panels & was manufactured by The Cutting Room in Huntingdon. The exposed base material, almost a bright yellow colour when first exposed, darkens in contact with sunlight and has now achieved its permanent shade. This is more subtle then when first installed, & has now blended in with its architectural setting. Up close, the detail is crisp and casts strong shadows on a sunny day.

The first drafts for the glazing manifestations  were produced in January this year and use the same iconography as the West Elevation cnc work. The manifestations however, being digitally printed, have no need for hard edges and manageable cutting paths. The designs will work with transparency and light to achieve their results. Digital printing further allows for a range of softer and finer details to be introduced. This is what I am currently working on. The manifestations serve a distinct purpose and have to comply with building regulations. Beyond that, the artwork can develop in many original ways to drift through the building. 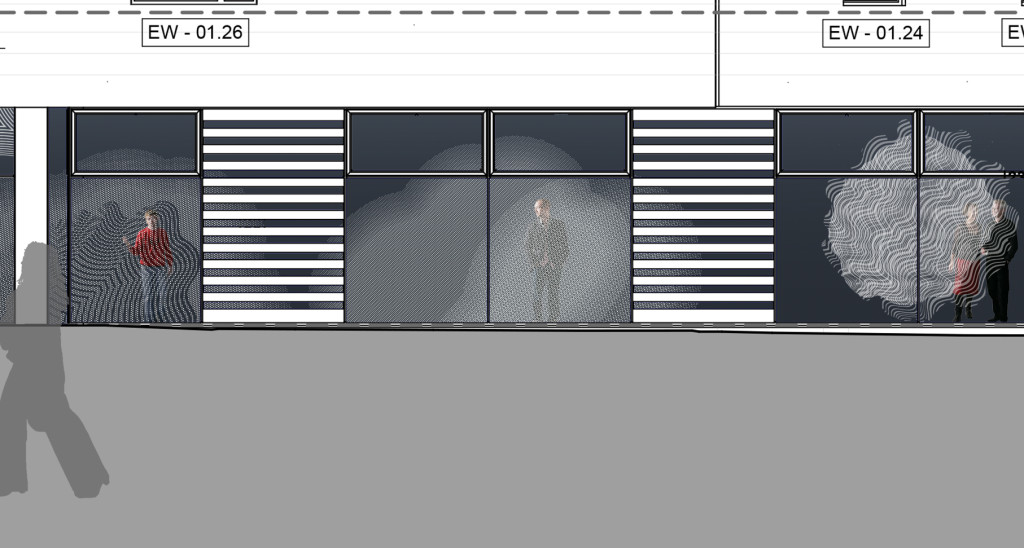 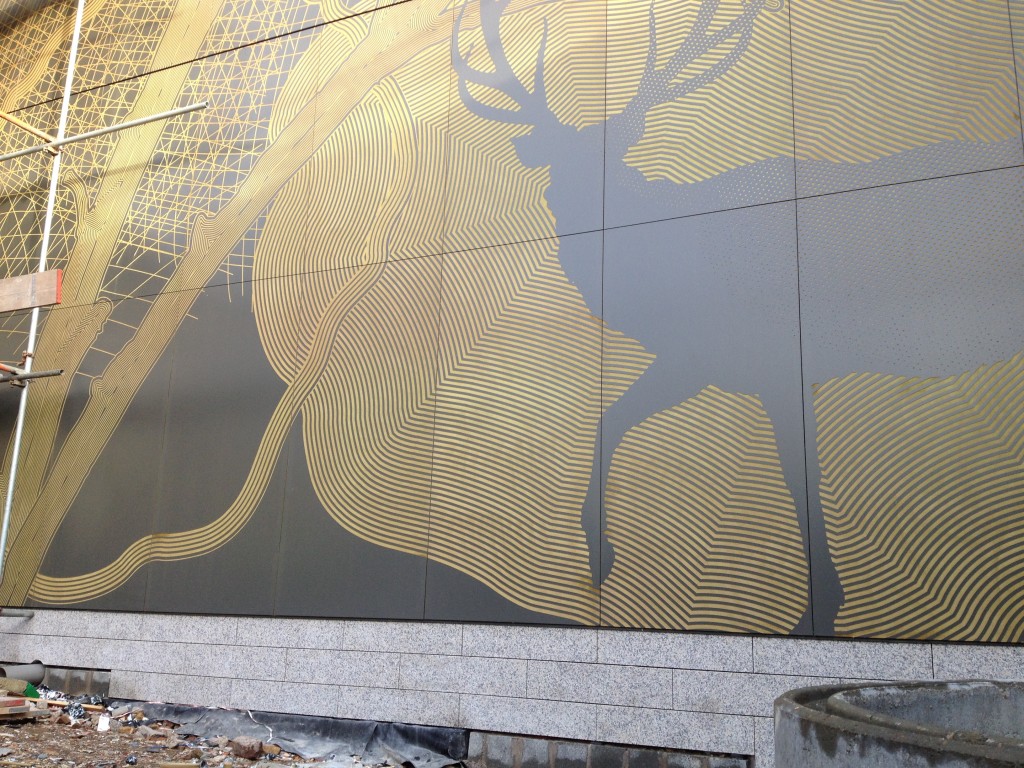 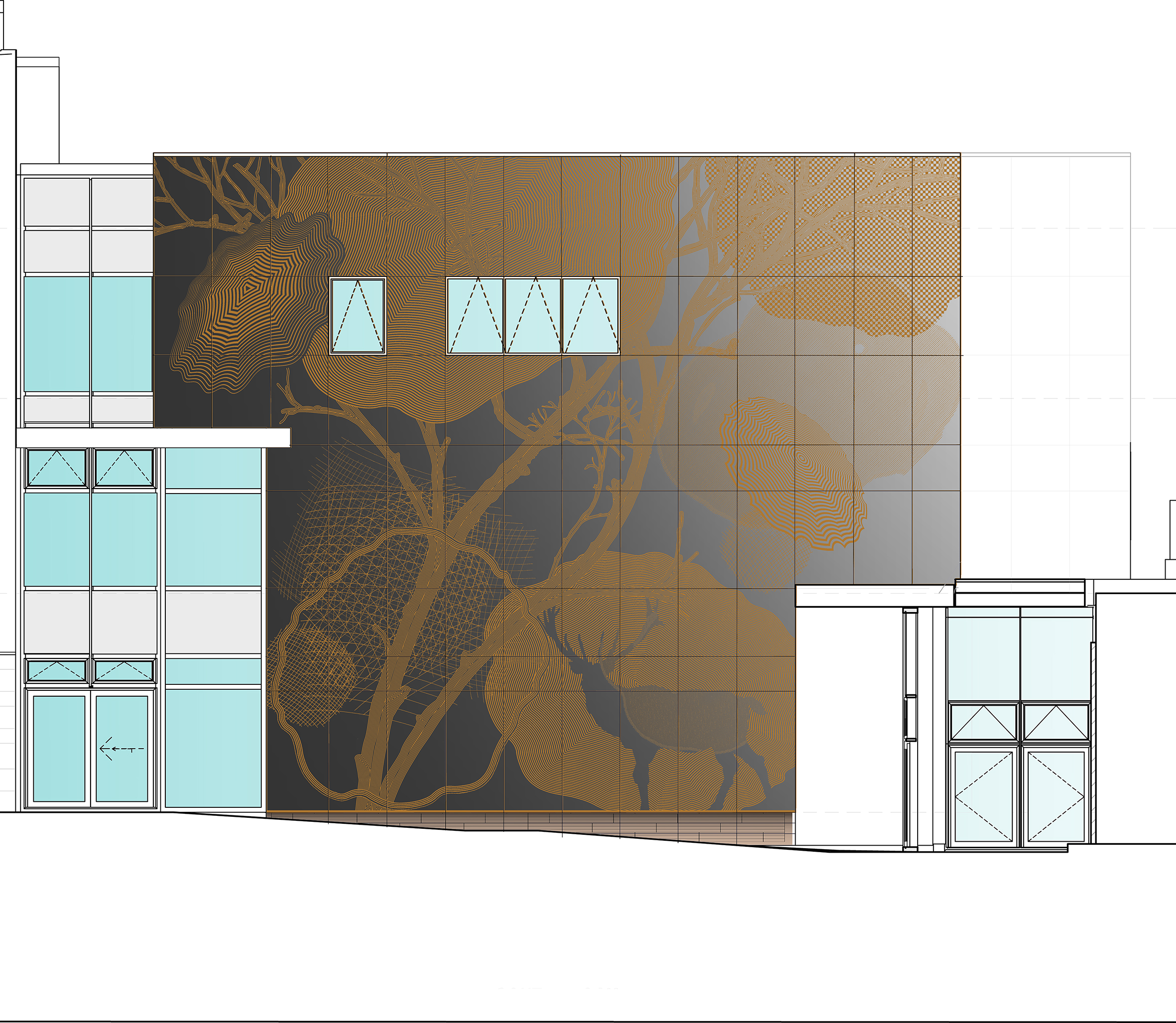 On Monday 23rd July, the draft designs for the Heart of the Campus project were approved by the board. I am now starting to work with the Cutting Room in Huntingdon to begin sampling the cnc routing process. 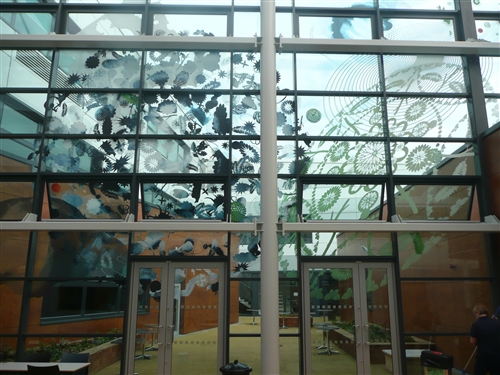 The area around Bransholme has been farmed, cultivated, reclaimed & regenerated slowly over a period of 1000 years. In 1966 the green landscape of ditches & fields was to change dramatically & radically with the building of the new satellite town of Bransholme, now home to over 30,000 people.

The area is still rich in its bio-diversity. The streams, ditches, drains & dykes which dissect Bransholme & its surrounding land provide habitat for a diverse flora & fauna.

At the very heart of Bransholme stands the new Winifred Holtby Secondary and Tweendykes Special School.

This project was inspired by the locality and its rich history and topography. It was equally driven by the relationship which developed within the project team, which included both Head Teachers.

The artwork was digitally printed onto optically clear vinyl & applied to the curtain wall glazing, which spanned both school environments at Winifred Holtby & Tweendykes Schools. It was manufactured & installed by Artworks Solutions Ltd. The new Schools are part of a ‘Building Schools for the Future’ initiative.