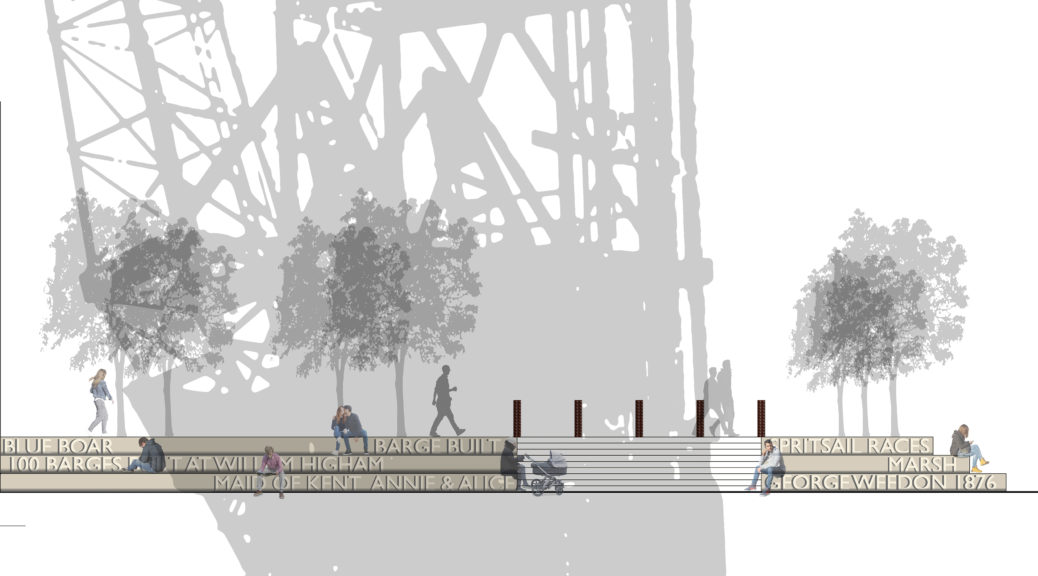 In December 2019, I began research and concept development of Phase 3 Public Art proposals for Rochester Riverside. Commissioned by FrancisKnight Art Consultants for client Countryside Properties and The Hyde Group.

I have had access to some amazing aerial images from Britain From Above. The following black and white images are so evocative and detailed, they tell a fascinating story of our site’s industrial and social history, nothing much of which survives today, except the large crane.

The above image from 1965 shows the Gasworks, Limehouse Wharf, Acorn Wharf (Shipbuildng) Acorn House, RMC Aggregates and Ready Made Concrete, Cory’s Wharf (Coal), Chatham Goods Yard (Railways), Blue Boar Wharf, Furrell’s Wharf – almost all the way to Chatham Intra. So much to be inspired by…

I am collaborating with LUC and BPTW who are leading on the architecture, masterplanning and landscape design.

I am continuing to develop the work I created for Phases 1 & 2 as the site has endless riches to be inspired by. My problem is knowing where to stop the research. Each stone unturned has golden threads to follow. Contextually, we are now on the site of Blue Boar Wharf, in its heyday a major Barge Building site, with two Yards, Upper and Lower occupied by two businesses – William Higham, ran the Upper Yard, where he built 100 Barges between 1876 and 1901 & George Weedon the proprietor of the Lower Yard.

Above: Gyproc Products (Plasterboard), started production on the Rochester Riverside site in 1933, just 3 years prior to this images from 1936 (the large white shed in the centre of the picture). Cory’s Wharf, with its ‘5 Cranes Dancing’, is in the foreground.

Above: The coming of the railways in the 1840’s effectively separated the town from its salt marsh grazing pastures and community centred around The Common. The Cattle & Livestock Market – seen bottom left in this image from 1936 has rooftop graphics – advertising its products – probably for the benefit of train passengers, as the track was raised on an earthen bank and brick viaduct. ‘Thorley’s Food for Cattle’, & ‘Thorley’s Food for all Stock’.

Above: This Postcard must be a very early image of the site, as there appears to be no industrial development of the Riverside site.

There is a great short film on You Tube called the Medway Dock Crane, which show the Blue Boar Wharf site and the whole of Rochester Riverside, prior to development by Countryside as seen from a drone. Click on the above link to view.