Just over four years ago we completed the project at Sheffield Hallam Collegiate Campus.

Although I took a fair number of images at the time of the glazing manifestations, which were applied to the East elevation glazed curtain walls, I focussed on the interior images only.

I had no decent images of the external elevations with the artwork completed.

I recently got in touch with the Photographer Lisa Daniels, who made some wonderful images of the building having been commissioned to record the external landscapes by the project architects HLM.

She has let me have access to this great image.

‘Heart of the Campus’ for Sheffield Hallam University has also been featured in ‘JOURNAL ARCHITEKTEN UND PLANER’ with some great images. Again, this was sent over to me by Rockpanel, who have produced some pretty wonderful PR on the project – the sort of coverage I could never achieve on my own – so a big thank you to them !

Rockpanel sent over these images of the ‘Heart of the Campus’ project featured in the August edition of FASSADE Technik Und Architektur a German architectural magazine. Apologies for the poor quality of the first image !

I wanted to make draw your attention to the Guardian Obituary for Ken Hawley, who passed away in August 2014 aged 87 –

“Ken Hawley, who has died aged 87, was one of Sheffield’s foremost industrial historians, a former tool salesman whose inquiring mind, formidable drive and eye for an opportunity led him to assemble a collection of international importance. The Hawley Collection, comprising more than 70,000 tools from Sheffield together with complementary material from elsewhere in Britain and around the world, includes 2,000 joiner’s planes, 1,000 table knives, 260 micrometers, 50 anvils, 4,000 catalogues and thousands of associated documents. Having been housed for many years in a large shed in Ken’s garden, it now has its own permanent display space in the city’s Kelham Island Museum, and is widely recognised as one of the best places to learn about tools and tool-making anywhere in the world”. The Guardian

I met Ken whilst researching my commission for Sheffield Hallam University  & had a very memorable day spent searching through the archives and collection with him bringing all manner of objects to me. His enthusiasm and passion were very much evident, as was that of the team of volunteers who assisted and managed the collection with him.

I was keen from the outset to explore a site-specific response to the project brief. With that in mind I have been researching the many collections and archives housed by Sheffield Museums and Libraries. I am particularly drawn to the history and manufacture of cutlery in the city. Individuals such as Ken Hawley & the wonderful Hawley Collection at Kelham Island Museum, have made enormous efforts to preserve this legacy.

I have been really fortunate to have the Heart of the Campus artwork at Sheffield Hallam University featured by Rockpanel in their online newsletter this month.

The project has also been featured as a full page spread in Roofing, Cladding and Insulation magazine, January 2015 issue and will also appear in Public Sector Build Journal

My colleague Jenni Muston at Rockpanel,  has sent me some wonderful new images taken of the ‘Heart of the Campus’ facade artwork by the photographer Jason Newsome.

He has really managed to get some brilliant shots in varying light, which show off the variations in surface quality and light reflection. Thanks to both!

Some new images have been issued by GRAHAM who delivered the Heart of the Campus project for Sheffield Hallam University Collegiate Campus.

The West Elevation artwork has a great impact on the building facade.

The rainscreen artwork was produced in collaboration with Rockpanel and The Cutting Room in Huntingdon. Project Contractors:GRAHAM – Project Architects: HLM Sheffield.

Yesterday the university client approved the Phase 2 artworks for the glazing artwork manifestations at the new ‘Heart of the Campus’ building for Sheffield Hallam University, Collegiate Campus.

The project was delivered by Graham Construction and HLM Architects.

The digitally printed glazing manifestation artworks will be manufactured and installed by VGL.

Tuesday, August 2nd 2014 – Collegiate Crescent, Sheffield Hallam University. Today I attended on site to review the Phase 1 glazing manifestation artwork installations for myself and meet with VGL who were on site to view the works in tandem with the main contractor, Graham Construction. I was also meeting with the University Clients to review the final scope for the Phase 2 installation of artwork. The building now appears to be semi open for use – but still going through various procedures and protocols, I suppose to ensure all goes smoothly once the mass of students arrive later this month! Great not to have to gear up with PPE. The building is looking amazing. Graham & HLM have done a wonderful job. External landscape is almost completed. The East Elevation of the building has an amazing aspect. It was a clear blue-sky day with lots of sun, which are good conditions for looking at the manifestations, as they are more likely to cast great shadows, which add considerably to the impact and variation within the works.

The West Elevation rain screen is really quite reflective in strong sun. Athough this is a painted grey finish, it is glossy and can appear metallic. The exposed Rockpanel material beneath the colour coat has now really darkened from the earlier yellow colour. The surface is more subtle, but richer in appearance. The impact is muted from afar, but the details really begin to emergeon the approach. 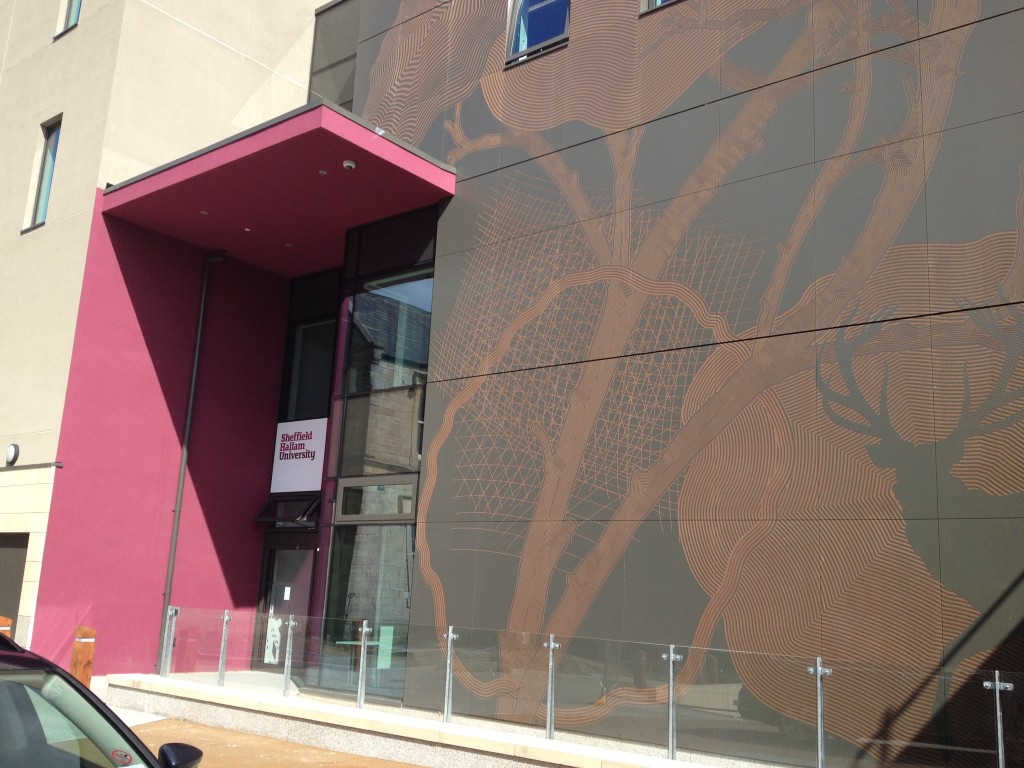 This is the three storey central atrium space and ‘Heart of the Campus’. The client had originally commissioned artwork manifestations to much of the visible glazing, but on reflection, the transparency and legibility of the interior spaces & architectural form may have been compromised and it was decided to omit them from the project.  The artwork manifestations to the ground floor exterior curtain wall glazing, linking the East and North entrances, is still being commissioned as the Phase 2 works. 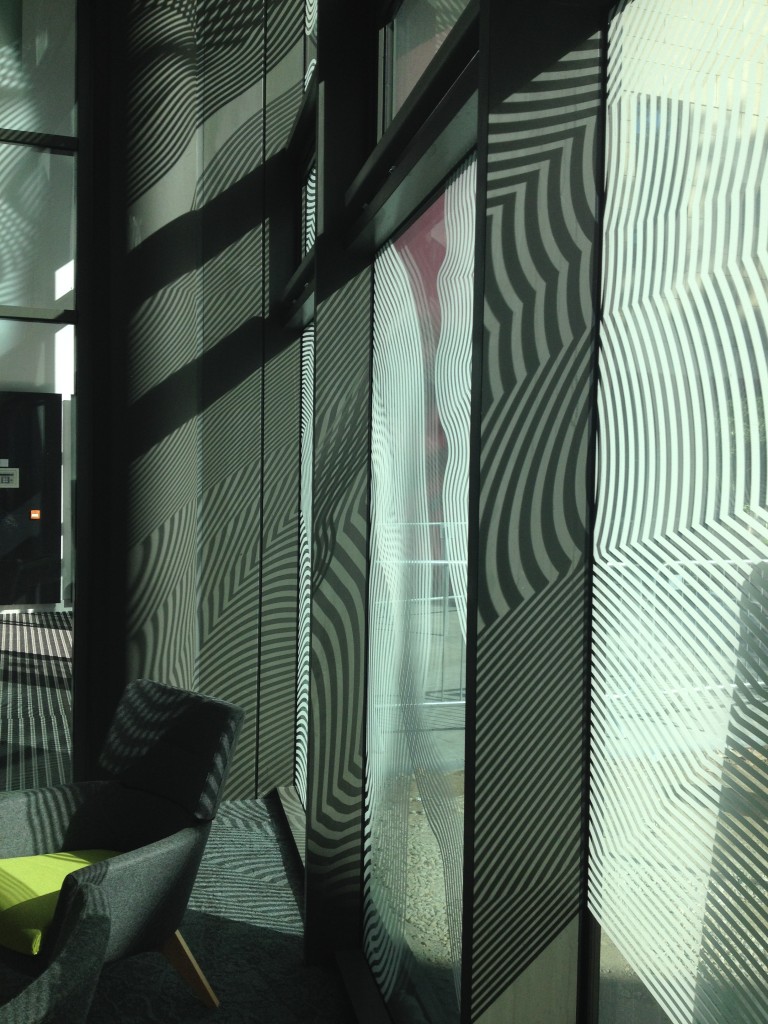 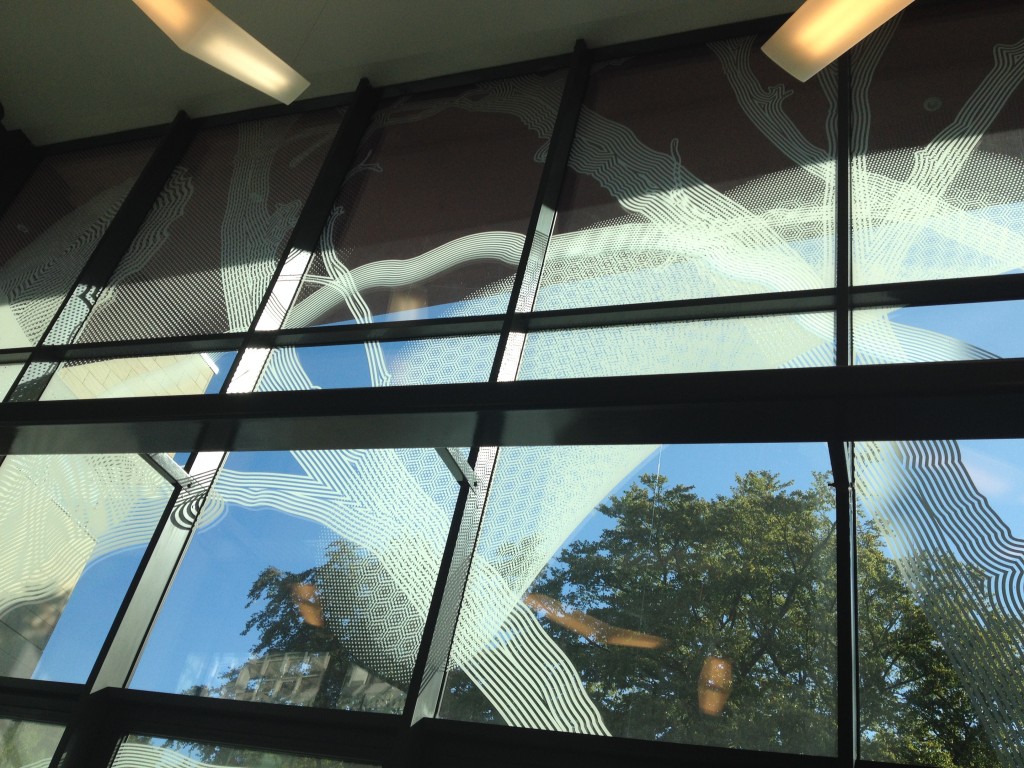 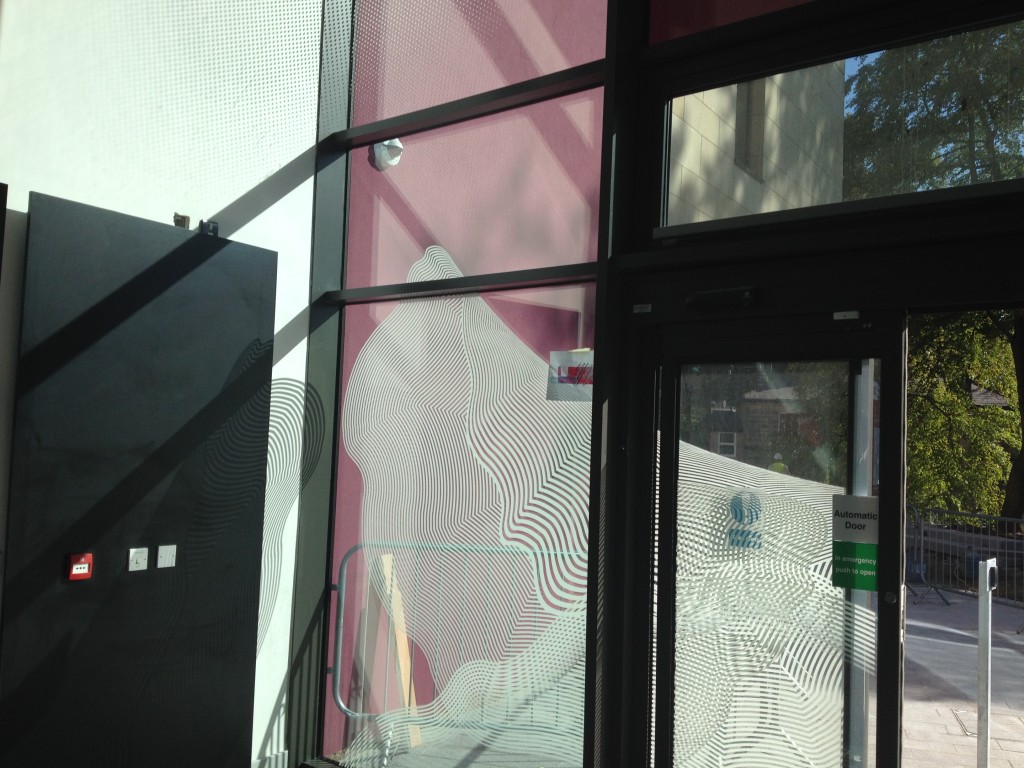 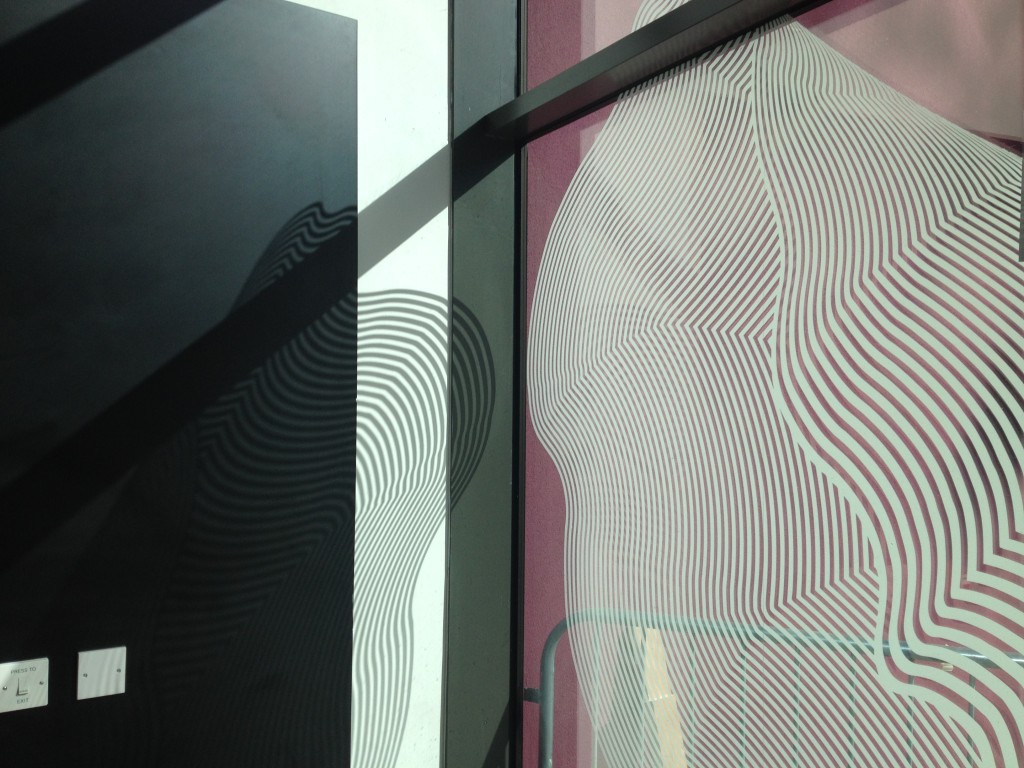 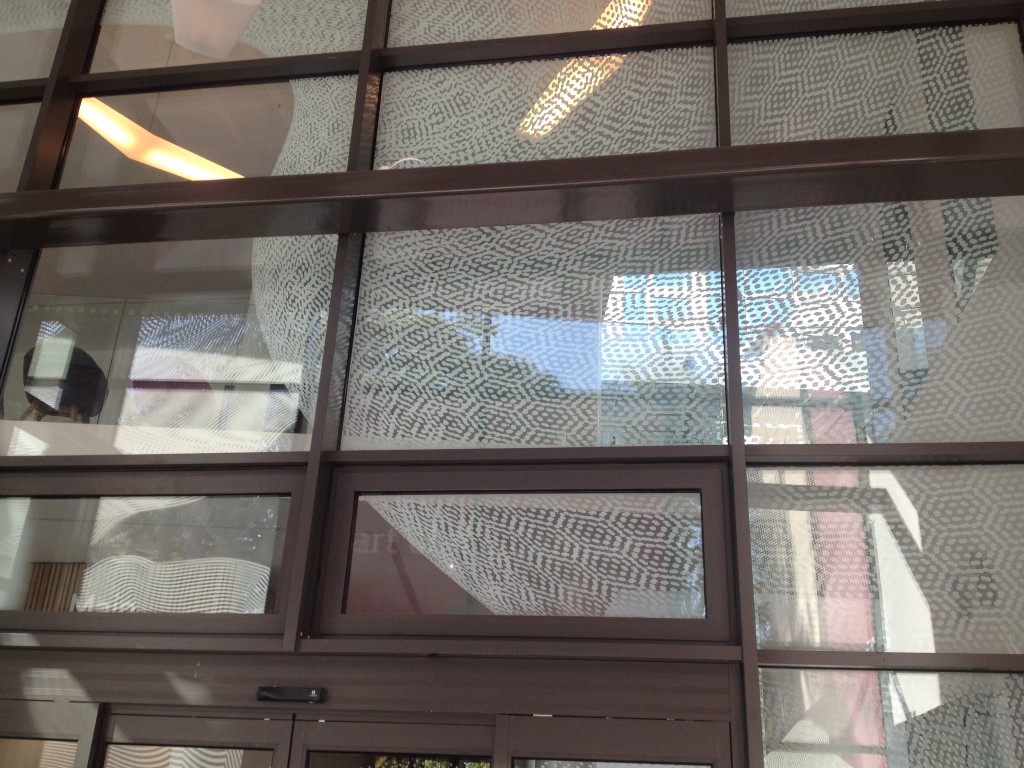 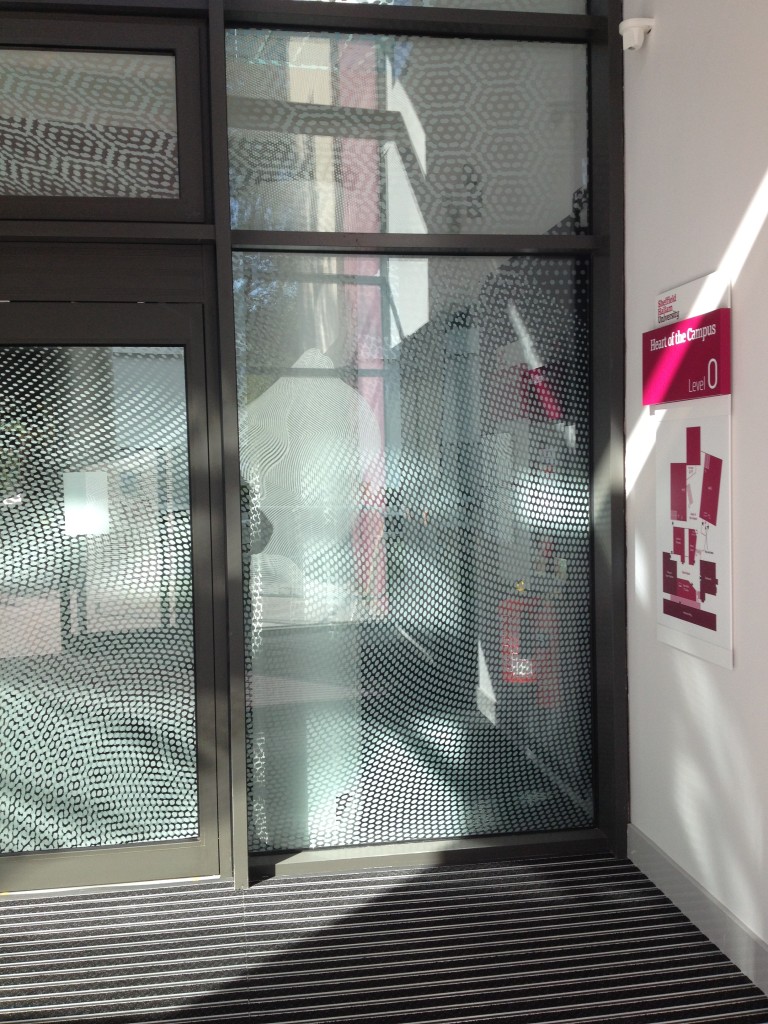 Tuesday 26th August 2014 Several images of the installation have just come in from VGL ‘s installers. These are low res images. I will be making a trip up to Sheffield in the next week or so to review the site prior to the Phase 2 works being undertaken. I will hopefully get more detailed images too !