I recently came across the work of the photographer, John Seaman, who had been commissioned by the main contractor for the Jubilee Building BAM to make a photographic record. Very lucky for me, that he has a great eye for catching the spirit & intent of the tensile artwork and its relationship to the building and interior space. ’70 years on…’ was a collaboration with Architen Landrell & VGL Vinyl Graphics  & was commissioned by Musgrove Park Hospital Capital Projects Office & Art for Life

The Central Concourse Screen ’70 years on…’ was created to celebrate the delivery of the Jubilee Surgical Building & the 70th Anniversary of Musgrove Park Hospital. The project was Heritage Lottery funded.

The work is presented as a digitally printed tensile fabric screen made of 26 individually printed panels. It is supported by a bespoke lightweight aluminium & stainless steel double-sided ladder frame 21m x 1.8m, which is itself hung from 3 steel supporting columns of the Central Concourse building. The design & manufacture of the tensile screen and its method of digital printing balance well with the content of the work & its evocation of the past to present a contemporary artwork in a 21st Century Hospital.

The artwork is presented as a landscape, which, other than at each end, where curved steel panels protect the structure, the artwork can be viewed as a continual narrative sequence. However, this is not a timeline or a linear narrative, which has to be viewed in a particular way or from a particular viewpoint. The observer can simply roll up at any point along its 42m length and begin a journey or their own.

Text was employed in the design as both an aid to the visual narrative & to emphasize the importance of the hospital’s archive collection in this 70th Anniversary year. It also recalls individual and collective voices from the last 70 years. The work done by Louise Donovan, an archivist working with staff and patients past and present to recall their experiences working here has been included in “Sensing our Past”. 70 years of Musgrove Park Hospital’, published in 2012

Words have been used to draw with, or to conjure up the dynamic energy of the hospital. It is presented in a variety of ways, for example, following the line of the Galmington Stream, which runs along the boundary of the Hospital, or as a gestural expression, such as the whirlwind vortex drawing, or a simple circle of fine white text.

They are an eclectic and often mis-matched set of words, evocative of half remembered memories, anecdotes and stories, (as opposed to reproducing hard facts and figures within a fixed timeline). There are perhaps more ‘distant’ voices from early in the life of the hospital, particularly from it’s wartime experience, but I feel this is the way with memory – recall is distant and suggestive of the ‘good old days’.

Some elements within the artwork are obviously and easily recognizable, such as the iconic Eisenhower Tree & Galmington Stream, whilst others are abstract and elusive. A great number of the references are archival in origin, such as the colours, which were influenced by boxes of medical artifacts, some in the original packaging.

Bunches of flowers appear from between the seam joints, which evoke the Lily of the Valley presented to HM The Queen Mother or flowers given by visitors, which were held in vases attached to columns in the Nightingale wards.

The photographic archive too, which contains hundreds of images of staff at work and celebrating events such as Christmas & retirements, as well as visits by Royalty, or the American World Heavyweight Boxer, Joe Louis and the entertainer Bob Hope, who both visited the Hospital during World War II.

My own personal experience of being a part of this Hospital community since 2005, when I was appointed Lead Artist on the 10 year Hospital development programme is also evident in magery influenced by past projects undertaken here. 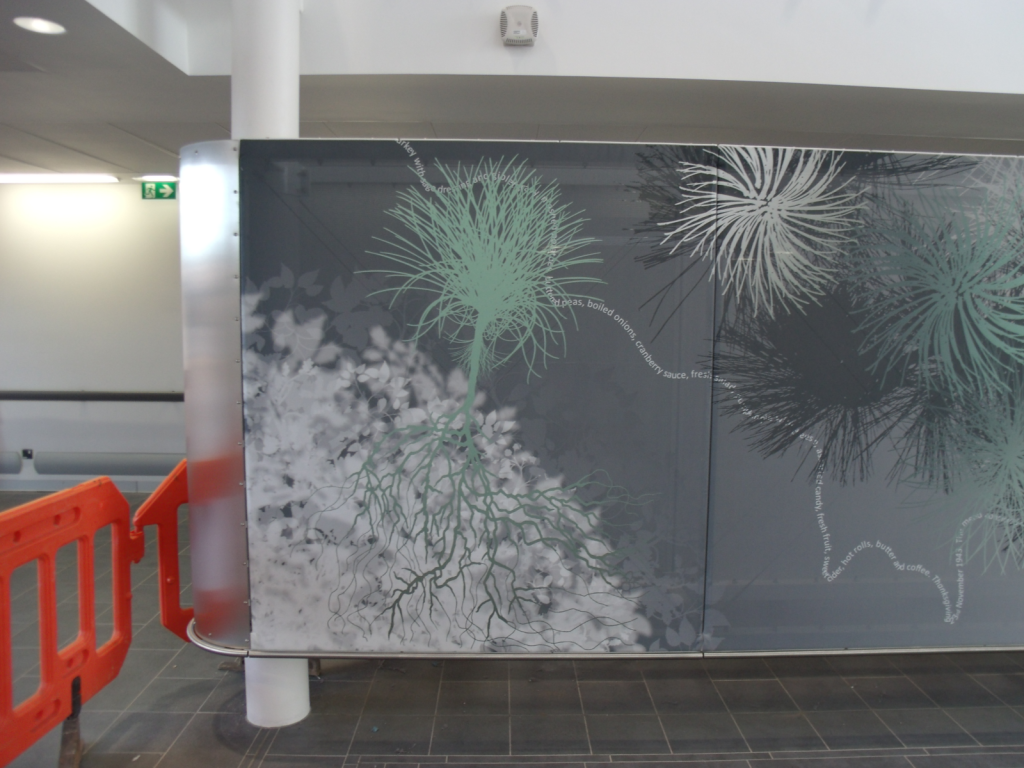 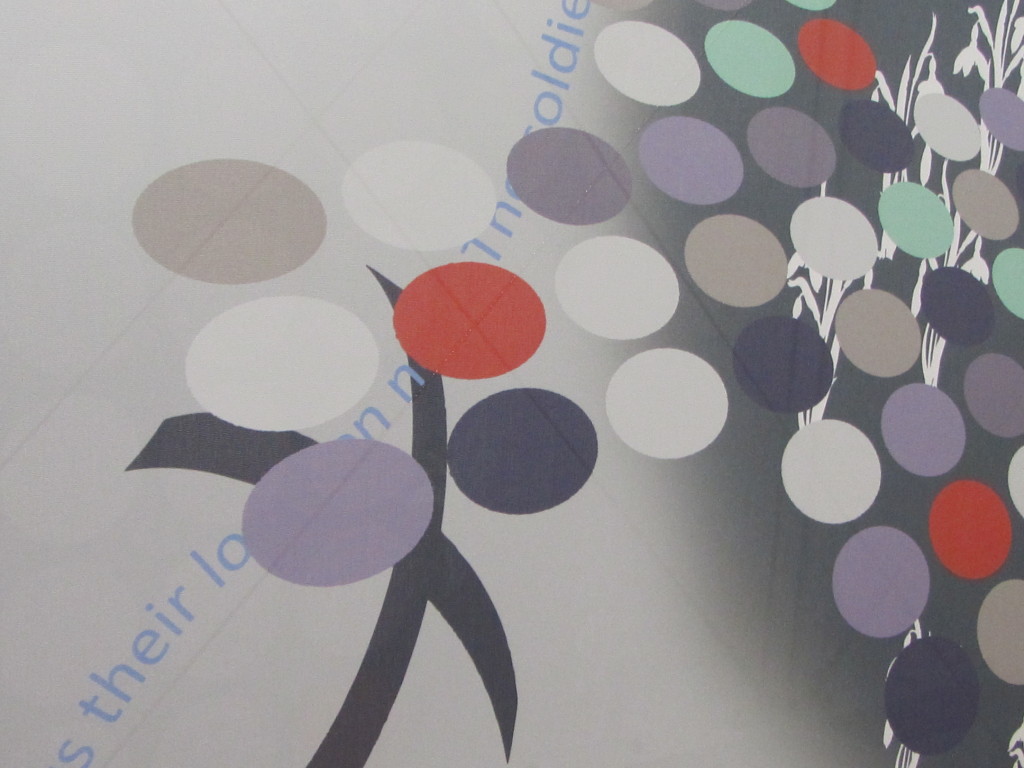 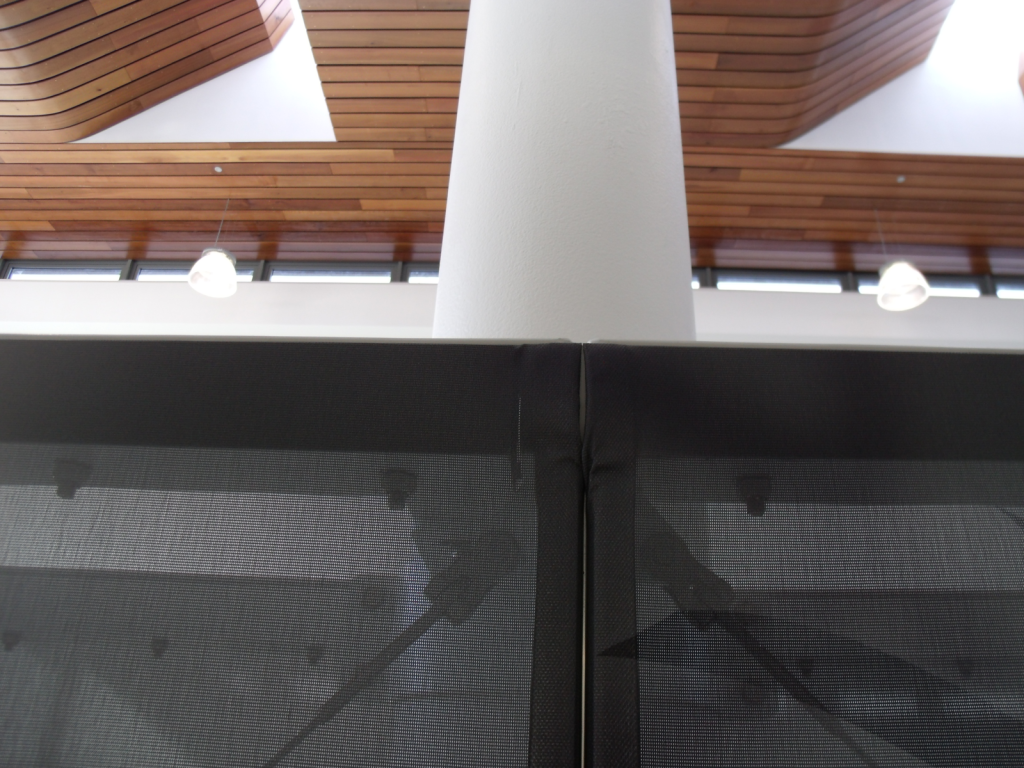 The Jubilee Building Central Concourse Project at Musgrove Park Hospital has now completed on site and the new surgical building was fully opened on 7th April 2014.

This art commission was led by Steven Power, Senior Project Manager for Capital Projects at Musgrove Park Hospital, Taunton along with Architects BDP and Contractor BAM. Specialist contractors Architen Landrell, Metafab Solutions Ltd and Digital Printers VGL were all integral to the success of the design & production. Bronwen Gwillim, formally Art Co-ordinator of Art for Life at the Hospital initially led the commissioning and early stages of the art project in 2012, and handed over to Lisa Harty in her new role as Arts Co-ordinator to oversee its completion.

The tensile artwork, funded by the Heritage Lottery celebrates the completion of the Jubilee Building as well as commemorating the 70th Anniversary of the Hospital originally founded as a US Field Hospital in World War Two.  I worked with the Hospital archive and the archivist Louise Donovan as well as bringing my own experience to bear, having been associated with the Hospital for the last 7 years and Lead Artist on a number of projects.