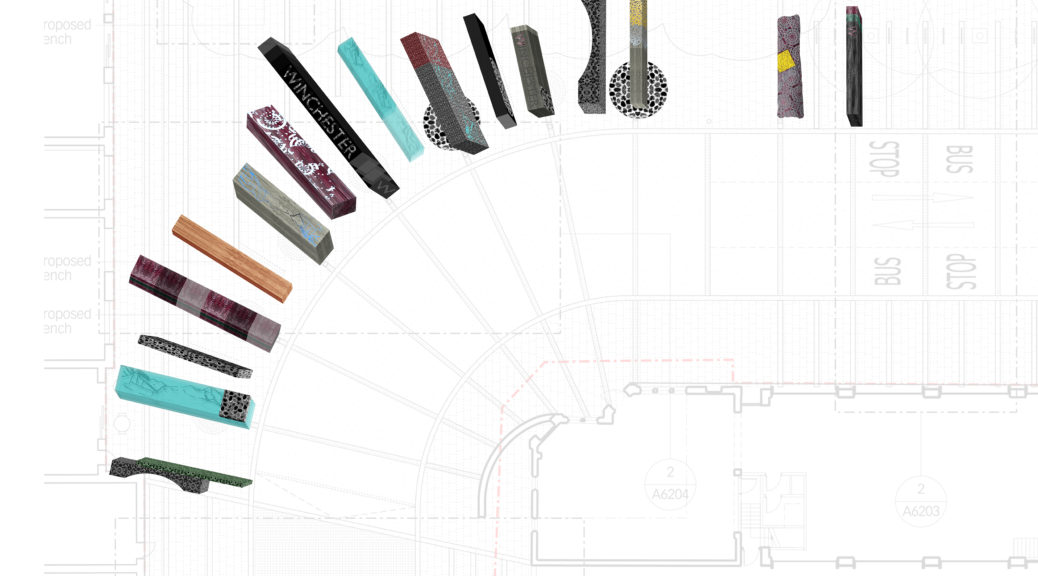 In June 2019 I was issued with early draft plans for the public realm proposals at the Station by LDS Architects on behalf of Winchester City Council. I proposed to add a layer of creative interpretation to these plans, based on my contextual research and employ the setting out details within the LDS plan as a secure foundation into which I could set my public art concept drafts. My proposal was always going to be about utilising the need for paving, seating, retaining walls and other practical details of public realm highways engineering to keep visual clutter at a minimum. This would also be more economic in terms of budget use and future management and maintenance.

Above: The Station building is on the left of this plan drawing (as seen from above). The plan for the public realm is primarily a sequence of parallel horizontal bands (green) delineated in the paving, which flow downhill from the Station towards City Road and another series which flow uphill along Station Road. However, this baseline geometry is combined with a radial pattern (also in green) which expresses the radius curve in the highway as it transitions from Station Road to Station Hill. This radial pattern provides the anchor for a series of seats (red) and secondary barrier structures (blue). These are concept ideas only – and not designs.

Above: This concept study shows a series of interrelated structures – which could be seating, walls, barrier structures or paving – set out in a radial pattern. These forms are presented as interpretive devices which exhibit combinations of materials and motifs, which seen together in this way embody ideas and responses developed from the contextual research I have undertaken.

Above: The Winchester Bible is regarded as the largest & finest 12th century Illuminated Manuscript. The script is by the hand of a single monk scribe from Winchester. However, the magnificent illuminations were often drawn and painted by itinerant artists – lay professionals who travelled between monasteries and centres of learning. These Illuminated Initials have been inspirational, as has the Morley Library, of which the Winchester Bible is a part. Bishop George Morley bequeathed his collection of rare books to the Cathedral in the 17th Century. His collection is also monogrammed.

Above: Plan study (meaning ‘seen from above’)of a monolithic sandstone bench with a flat seating surface with the inset letter W and Circle motifs in flint aggregate terrazzo. Below: Sandstone & Flint are primary building materials in Winchester.

“Of particular interest is the ledger stone (memorial) of Francisca Clobery, the daughter of Sir John Clobery. She died in 1683 and her grave is in the south aisle of the Retrochoir, in front of her father’s monument. It is of a distinctive Ordovician limestone (around 465 million years ago) from the Island of Öland, Sweden, containing the straight-shelled Nautiloid.” from ‘Winchester Stone’ by Dr John Parker 2016. ‘John Parker studied geology at Birmingham and Cambridge universities. He is a Fellow of the Geological Society of London. For over 30 years he worked as an exploration geologist for Shell around the world. He has lived in Winchester since 1987. On retirement he trained to be a Cathedral guide’. John has personally shown me around the Cathedral and pointed out many geologic wonders and quirks.

Above: Studies for objects (seating?) in Timber, Sandstone and Swedish Marble employing techniques of inlay, lamination, polishing and sandblasting.

I hope to investigate manufacturing processes which allow stone to be cut, laminated, decorated and finished in a manner which embodies the richness of the Cathedral interiors and it’s ongoing repair and regeneration – BUT – in a functional manner, either as seating etc or as a method of improving wayfinding for visitors.