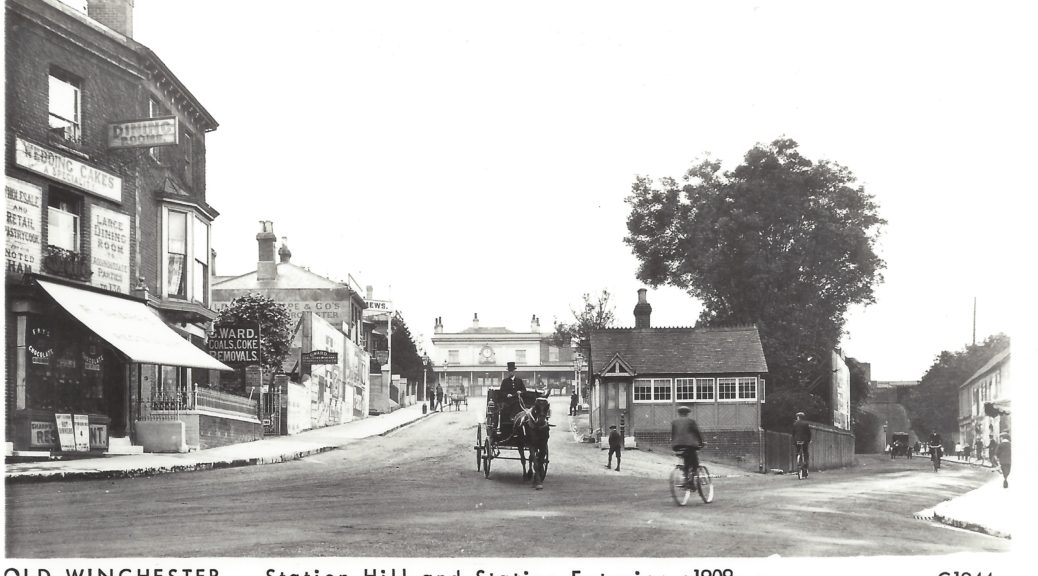 Station Hill leads up to Winchester Train Station from the busy junction of Stockbridge Road, City Road, Andover Road and Sussex Street. Swan Lane also joins here. The site has been historically known as Carfax, meaning the meeting of roads. The Carfax Hotel, formerly on the site now occupied by the Hampshire Records Office took its name from this historic site. The Masterplan proposals for this whole site, developed by Winchester City Council’s Consultants Lifschutz Davidson Sandilands Architects, is referred to as the Carfax Site. and incorporates the Station Approaches & public realm.

Station Hill today doesn’t give much away about it’s local community or life as a lively neighbourhood, but this wasn’t always the case.

I will try to add to this post throughout the project as new research throws up characters and stories.

Above: Warren’s Street Directories, held in the Hampshire Records Office on our doorstep, lists street by street, almost everyone who lived at each residential property. If this was a business, then it lists the nature of the business, as well as the people who owned it. A wonderful archive. The books also contain the most interesting advertising for local products and services, mostly & brilliantly illustrated.

The Train Station is seen above in the bottom left quadrant. Roger Brown’s model was based on the OS Map of 1873. Roger had been a Planning Officer for Winchester City Council.

Some key building are still extant , such as the Station and the South Western Inn, formerly the Railway Refreshment Inn – & up until 2015, Winchester Register Office. The Carfax Hotel is visible on the junction of Station Hill & Sussex Street. The terraced houses of Gladstone Street are there too, but the Reservoirs of the Sussex Brewery, seen on the OS Map of 1870 now appear to be allotment gardens. Needs a bit more investigating to discover what the reservoirs were for. I can’t find any reference to the Sussex Brewery.

Above: A bit blurry…but nonetheless the Station and Public House are clearly shown. A narrow footpath leads to Sussex House just beyond the Station in this image. A lovely circular garden feature can also be seen just left of the Station forecourt behind a fence. I wonder if this was a public or private space?

Above; At centre is the Carfax Hotel building on Station Hill and Sussex Street. This important crossroads, (or Carfax), shows a complex junction of City Road, Swan Lane, Station Hill, Andover Road and Sussex Street. Looking rather genteel – and not the complicated crossing for pedestrians we experience today.

By 1970, the Carfax Hotel, first named in 1918, had fallen into disrepair during the 1960’s. It had been taken over by the King Alfred Teacher Training College as student accommodation. However, it was demolished in 1972 as part of a road improvement scheme.