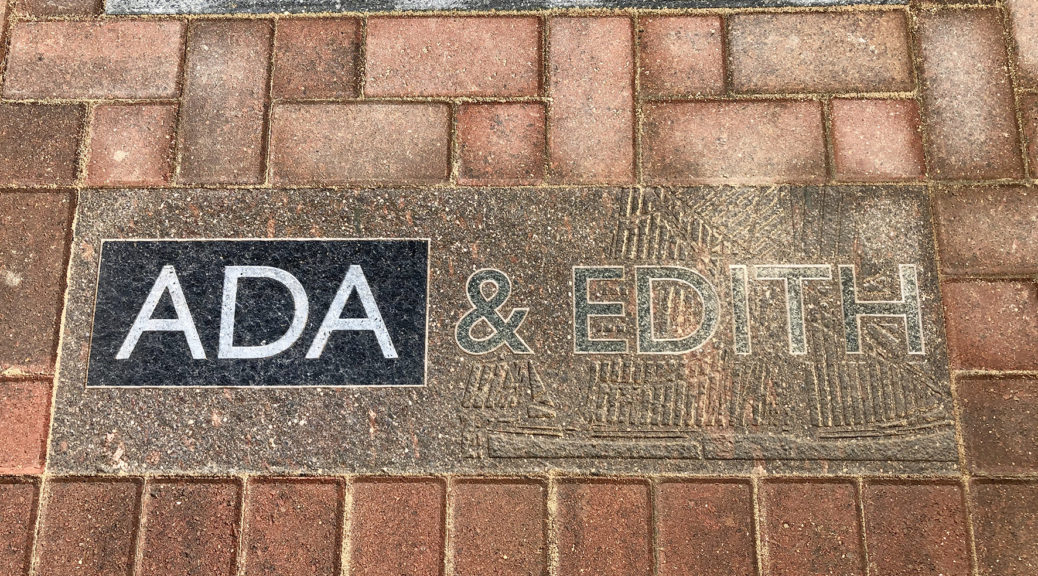 By mid-December 2019, a number of the bespoke public art units (5 of 24) had been finally installed into the footpaths and thresholds of new properties along sections of Common Creek Wharf and Thalia Way. These parts of the site were fully occupied during the weeks leading up to Christmas. I will update as more units are installed –

Above: You may just be able to make out the ‘5 Cranes Dancing’...just below the CORY’S WHARF text . These cranes were eventually replaced by 2 x 200 tonne Cranes, each capable of lifting 10 tons at a time.

I’m travelling up north to Bolton this week to see the final units completed and hopefully sign off the work so it can be delivered to Rochester Riverside for installation. Can’t wait to see them all.

These new images are just in this afternoon thanks to Mathew Haslam of Hardscape – as their skilled stone specialists focus on the applied detail. Water jet cutting, inlaying, sandblasting and laser etching their way through 15 bespoke units destined to be embedded into the landscape of the new housing development at Rochester Riverside for client Countryside. This highly bespoke work needs to be handled with care and demands high levels of craft skills.

Below: This unit is 9 of 15 – ‘SHELDUCK’, a Kobra Green Granite base slab with water jet cut inset motif & text in black Carlow Limestone, which has been laser etched with surface detail. Further sandblasting of text into the green granite, will complete the work.

Above: This is the base slab of black Carlow Limestone, which has been laser etched first & then water jet cut – but the large letter ‘W’, the ‘&’ and the diamond motif have yet to be chiselled out. See Below –

Above: The water jet cutting removes a series of lines from the granite, which are determined by the CAD programme, which creates the cutting paths. These pathways are interesting in themselves as patterns, but in this instance they have to be chiselled out carefully by hand, to create the void space for the granite inlay to be fixed.

Above: This images shows the void spaces chiselled out from the Carlow Limestone. The letter ‘W’ in Maple Red granite has already been inset and is awaiting bonding in place – the diamond motif is just about to be inset. These images are wonderful for showing process, craft and the mix of skills from CAD technology to work by hand & eye. 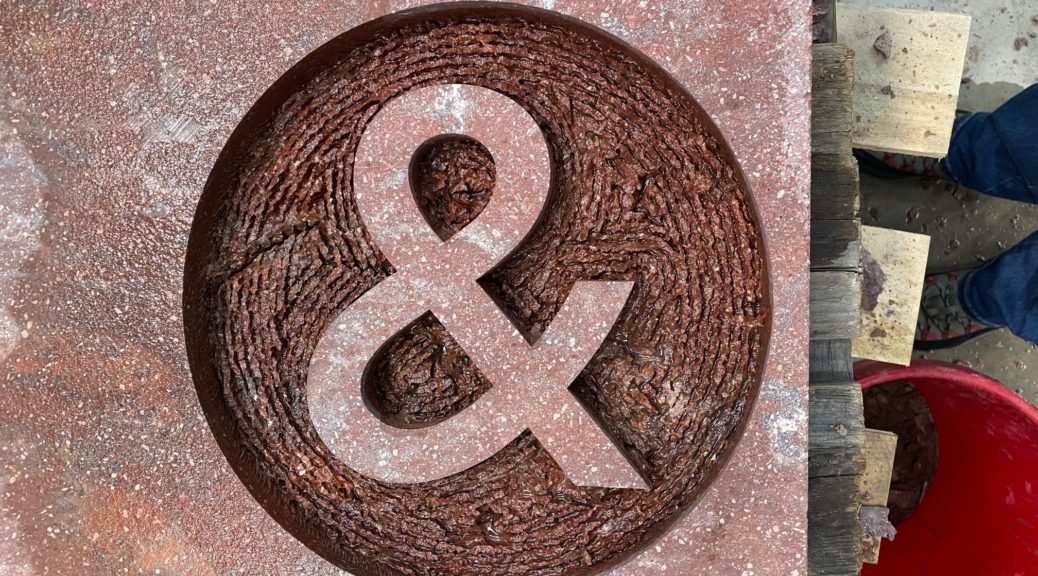 Oh my word…we’re on a roll in production up at Hardscape in Bolton.

These images are hot off the press, as skilled stone specialists at Hardscape focus on the applied detail. Water jet cutting, inlaying, sandblasting and laser etching their way through 15 bespoke units destined to be embedded into the landscape of the new housing development at Rochester Riverside for client Countryside Properties. This work needs to be handled with care and demands high levels of craft skills. Hardscape have been excellent at providing creative collaboration .

Above: This is the ‘&’ from ‘WALRUS & NELLIE’. Water jet cut into a slab of Red Shiraz Granite 900mm x 300mm x75mm. It is awaiting the inlaying of the circle of yellow Amarelo Real Granite. It looks amazing. WALRUS & NELLIE were the names of two portable aggregate conveyors loading stone and cobbles on and off barges at Cory’s Wharf, Blue Boar Hard.

Above: This is the laser etched ‘DUNLIN A SALTMARSH BIRD’, , waiting to be water jet cut from its slab of beautiful Carlow Limestone & inset into a slab of red granite. See image below, where the DUNLIN has been partially cut out from the block in concentric linear patterns. This is a complex unit, with other letters inlaid. Precision is key. These beautifully crafted objects embedded in the landscape, will be a gentle reminder of the natural, social and industrial history of the site.

The laser etched image of the Shelduck will now be water jet cut out of the Carlow slab and the motif inlaid into a slab of Kobra Green Granite, which has the shape of the bird already cut into the surface.

Interesting to note also that the Carlow Limestone has beautiful fossil shells embedded. Also note that these are not my feet, they probably belong to Pedro, who is overseeing and also working on my project. Without skilled people like this, I would be lost ! 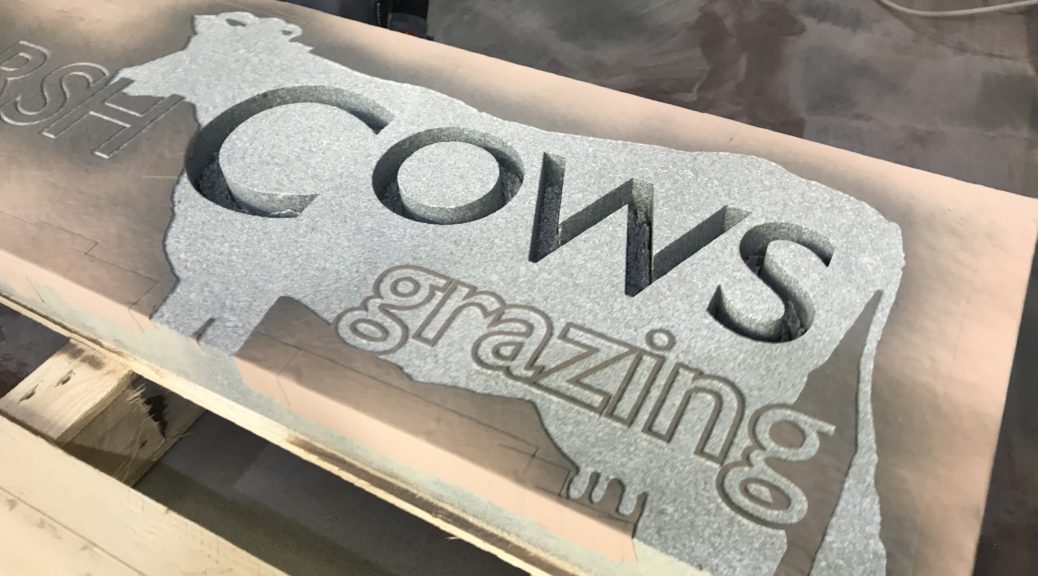 Mid-September and it was up to Hardscape, Bolton to see progress on the manufacture of the bespoke inlaid granite paving units. As ever, the works are of a really high quality and Hardscape are always keen to progress & test their creative collaborations.

15 granite units are in production. These vary in size from 1200mm x 400mm x 75mm to 900mm x 300mm x 75mm and are destined to be installed at the thresholds to housing & apartment blocks at Rochester.

This work is achieved via water jet cutting and inlay techniques using colour matched resin to bond granite elements in place. Text and other motifs are also sandblasted at varying depths. 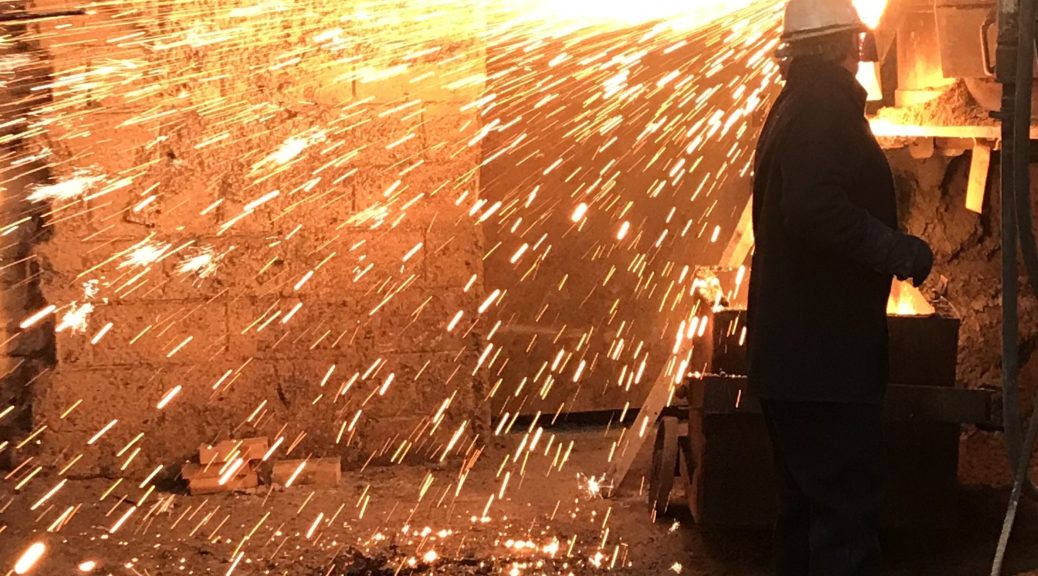 In August all was ready for the casting of the iron units and off I eagerly trotted on the train up to Hargreaves Foundry in Halifax to be present during a famous ‘Casting Thursday’! – I have been up to Hargreaves only once before and Andrew Knight, Foundry & Patternshop Manager showed me around the factory at that time. Even though this was impressive, (& it is !) it couldn’t match being present to witness my own work being cast. It is such a physical, visceral process, fully hands on and dangerous with it. The skill & craft is astonishing and it is this legacy of making, which Hargreaves has in bucketfuls, that I wanted to design into the public art work for Rochester.

Nine cast iron units have now been made, from 5 original cnc tooled patterns manufactured to my designs by Arthur Jackson & Co Ltd, Halifax. These patterns, cnc tooled from a type of resin block are used to prepare the resin sand mould boxes used in the final casting process. The cast units are then hand finished through grinding and polishing methods.

Individual one ton iron weights are used to secure the moulds during casting, such are the pressures of heat during the process. The moulds are constructed from a resin infused black sand, which has been compacted around the master pattern, which is then removed.

What I can’t convey here is the noise, heat, smell & excitement of this process during the critical stages of casting. The experience is vivid and visceral. I am watching something being made which could last for hundreds of years.

The units above and below have now been treated with Nitric Acid to prevent rusting through oxidation. The cast iron is almost black and the relief jumps out very cleanly.

‘Mr Gill showed me a very fine model of their barge Centaur, a 50-tonner built by Messrs. Gill & Son, specially for the 1899 Medway barge Race, in the astonishing time of 6 weeks.”

In his wonderfully evocative book ‘Spritsail Barges of Thames and Medway’, published in 1948, Edgar J March paints a highly detailed picture of Barge activity and life on the Medway. Many of these Barges started life in the boatyards of Rochester.

“Staunch and well built though a barge may be, each year sees a toll taken. Some yield at last to the cold embrace of the sea, whose caresses they have so long resisted, others steal quietly up some lonely creek to nose gently into the malodorous mud and settle down into their last berth, gradually to moulder away, forgotten by all save their one time masters, and perhaps, some sentimental fool like myself, who will gaze down on their rotting timbers and imagination see spars clothed with red-brown sails and hulls vibrant with life as they thrash there way round the Foreland.”

Describing the excitement and thrill of the Medway Barge Races – “The course was from Hoo Marshes to the West Oaze Buoy and back to the Sun Pier at Chatham, a distance of about thirty five miles…A strong easterly wind was blowing, and in Long Reach Verona’s bowsprit snapped off short, but the crew cleared away the wreckage and setting a jib topsail as a staysail, carried on to come sixth in their class.” Edgar J March.

Referencing a painting by T.B. Hardy, 1874, Edgar March goes on to describe the Medway as, “When this picture was painted, marine artists had little need to look for subjects. The Medway was alive with sailing craft : dainty little topsail schooners, picturesque collier brigs with apple bows and dingy canvas, barques from Scandinavia, bringing pine-scented timber from the Baltic to Rochester, and above all, barges innumerable, threading their way through the maze of traffic. One hundred a tide was no uncommon sight, and what a joy to a sail-lover that galaxy of russet, brown and ochre canvas must have been, many with various devices emblazoned on their mainsails – Lees’ stumpies had the white horse of Kent rampant on ebony coloured sails – all either hurrying down on the ebb or beating up against wind and tide. Now gone forever.”

…and “In  those far-off days, watermen, or “goozers”, to use their riverside nick-name, plied their trade in skiffs”. Edgar J March

William was a Barge Builder and they lived in a private house on Victoria Street, Rochester. The location of his Yard is show on the OS map of 1898 on Blue Boar Hard, just above the Pier. ADA & EDITH is just one of many barges built here between 1876 and 1901.

“It has been my privilege to go over and see the marvellous machinery for loading and unloading coal. The five large cranes, when seen at work bowing their stately heads, look like dancers executing a minuet; …when in repose, standing like so many soldiers on sentry duty, with fixed bayonets. What a contrast to see the way a collier is unloaded by these cranes, as compared with the old coal whippers’ days! A coal boat seems scarcely to draw alongside the wharf before it is steaming away again”. Edwin Harris Guides to Old Rochester, Pub. 1930 No. 27 Part 1. (Ref: ROC. 942.23 HAR The Riverside. Harris/Edwin. MALSC).

The earlier OS Map of 1898 records the same site some 30 years previously as Chatham Goods Yard. The site occupied by Cory’s Wharf is immediately below Blue Boar Pier along the HWMOT line.

‘The Medway Estuary is believed to be the most important area in North Kent for wintering wildfowl in numbers of international significance. The Saltmarsh serves as a roosting area for waders at high tide. Several scarce plant species include: golden samphire, perennial glasswort and one-flowered glasswort. The estuary is one of the best places in Britain for the study of glassworts. The grazing marsh has breeding and wintering birds of interest; the former include lapwing, redshank, pochard, mallard and gadwall, while in winter large flocks of may wildfowl and wader species are present.‘

Dunlin Calidris alpina alpina, 25,936 individuals representing at least 1.9% of the wintering Northern Siberia/Europe/Western Africa population (5 year peak mean 1991/2 – 1995/6)
These overwintering birds, along with thousands of others migrating or breeding species have been present on our site, however the numbers of Dunlin and other birds have undergone a decline, ostensibly to do with habitat loss and disturbance, which is of course of great concern.